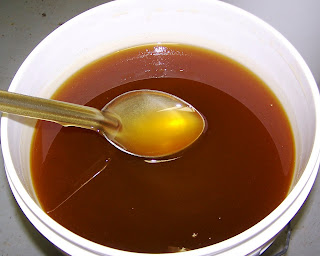 Early this morning I was listening to the radio while stirring pails of honey. Candice Ludlow, news director for WKNO FM Radio, NPR for the Mid-South, had travelled to a remote part of Tennessee to cover a story about a group of people who are helping to restore the endangered whooping crane, whose population was reduced to 15 birds in the 1940s. Candice was reporting on a project, Operation Migration, which is teaching whooping cranes the 12 hundred mile migratory route from Central Wisconsin to the West Coast of Florida. The team members are guiding the graceful whooping cranes, with their six-food wingspans, along the route by flying ultra light aircrafts. The huge birds form a v-formation with the aircraft. The pilot wears a costume fashioned somewhat like the birds to prevent them from imprinting on the image of a human. It is their intention to introduce “wild” birds into the wild. Beekeeper Shirley Murphy, who lives along the migratory route, offered the Operation Migration web site, http://operationmigration.org/Field_Journal.html. You can follow the flight of the whooping cranes, which are now half-way through their migration.

Meanwhile, in the honey house, I stirred the pails of honey, which I have been gently warming in an insulated, temperature-controlled unit to remove the granules of sugar showing in the picture. All honey forms crystals of sugar over time, and this does not harm the honey in any way. The speed at which the crystals form is determined by the nectars that the honey bees collected to make the honey and the temperature at which the honey is stored. Generally, honey derived from flowering trees, such as the tuliptree, granulate slowly; honey derived from flowers granulate more rapidly. The principal sugars in honey are fructose and glucose. Glucose is more stable as a crystal than a liquid in the highly concentrated honey. The honey may be re-liquefied by heating between 104 to 108 degrees. High temperature will alter the color and flavor of honey.
--Richard
Posted by Richard Underhill at 10:00 PM