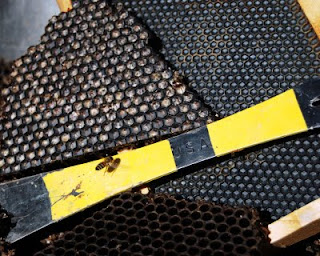 Honey bees build their own nest from sheets of beeswax that they erect in the bee hive or cavity they choose for a nest. When the young bees secrete beeswax from wax glands on the bottom of their abdomens, it varies in color from white to yellow. New comb in the bee hive is light in color; but as time passes, the comb continues to darken. After a number of brood cycles in the brood nest, the comb will turn from yellow to brown to black. In many ways the honey bees like these old combs. Swarms of bees are attracted to the old nests of abandoned bee hives. The old comb is rich in odors of bees, beeswax, pollen, honey, bee bread, propolis, and honey bee pheromones. While old comb is attractive to honey bees, it is a source of bee health problems. Beeswax readily holds chemical contaminants in the hive. Recent studies performed in the search for causes of Colony Collapse Disorder have measured a great number of chemicals held in the comb. In most cases the contaminants are miticides used inside the hive to control parasitic mites. Other chemicals found in the comb include agricultural insecticides and pesticides. Old comb is also a reservoir for spores produced by certain honey bee diseases, namely American foulbrood, Nosema, and chalkbrood.

Removing old comb from the bee hive is a good method of eliminating chemical contaminants and disease spores. At Peace Bee Farm we try to aggressively replace old comb with clean foundation for the bees to build new comb. This is an important part of our integrated pest management program. Click on the photo to see a frame of brood comb that has been scraped down to the plastic foundation. At the bottom of the picture is a piece of black, greasy-looking comb that has been removed. Above the hive tool is a piece of removed comb turned upside down to reveal the woven silk cocoons of pupa-stage brood.
--Richard
Posted by Richard Underhill at 11:27 AM