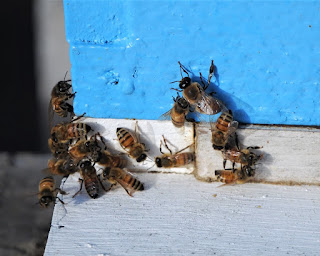 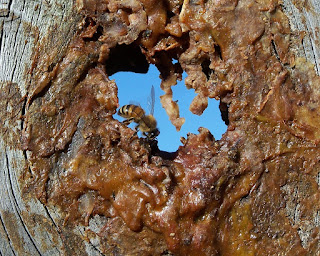 The first frost of the year came two weeks earlier than normal, but the cold night didn’t bother the honey bees in their warm, dry hives. Their hives are already set-up for winter with the brood nests centered low in the hives and plenty of frames of honey above and to the sides. Ventilation ports are open to draw off damp air from the top of the hives to prevent a build-up of condensation. Screened bottom boards are open. Ensuring that the hives have enough stored honey located where the bees can access it and providing ventilation are the only requirements for wintering bees in Arkansas. Whenever the temperature drops to 57 degrees Fahrenheit, the bees draw into a cluster for warmth. They consume their stored honey and generate heat in their flight muscles to warm the cluster. The hives have plenty of food in storage.

With clear skies, the afternoon sun brought the temperature up rapidly. As the air temperature rose above 50, the bees poured out of their hives for cleansing flights and foraging. Many bees were bringing in pollen from bitterweed, goldenrod, and fall asters. The sight of bees foraging for pollen usually indicates that the queens are still laying eggs and the nurse bees are feeding larvae. Other workers were bringing in fall nectar, producing strong flavored honey for the winter. A few bees could be found on lily pads foraging for water, and a some were gathering wood sap and gums for propolis. The bee in today’s photo is struggling to forage some propolis. She will use this bee glue to seal off any hive cracks. The bees will even build barriers of propolis inside their hives to reduce entrances or to block cold drafts. Only a few drones were seen at the hive entrance. Most have been excluded from the hives. Only queen-less hives will keep their drones into the winter. It is too late in the year for the mating of queens.
--Richard
Posted by Richard Underhill at 9:12 PM No comments: