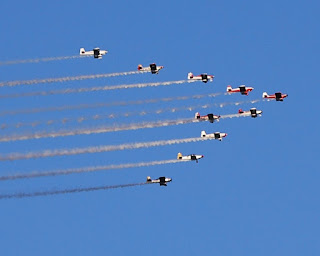 Toad Suck Daze is a social gathering held every spring in Conway, Arkansas, a state that has its share of towns with names reflecting a rich pioneer history. There’s Oil Trough, Fifty-Six, and Greasy Corner. Conway has its Toad Suck, a landing on the Arkansas River where the river makes a sharp bend from west to south. There are several speculations as to the origin of the region’s name, but a favorite involves rugged rivermen stopping at area taverns and sucking tankards of ale till their bellies swelled up like toads. Typically, crowds gather at Conway for Toad Suck Daze, a festival with live toad races, music and singing on the old court house grounds, and street vendors selling foods and crafts. Local beekeepers have tables filled with honey. This year’s Toad Suck event was interrupted by the world-wide spread of the deadly Corvid-19 virus with its necessary social distancing requirement which rendered the public event impossible. In response, aviators from the Lollie Bottoms Pilots Association conducted an airplane parade over the city for people to share an event while remaining personally separated. Today’s photo is the Bulldog Flight Formation Group passing over the city. When a virus enters a vulnerable population, it is likely to spread unchecked. With humans having no natural immunity to the virus, or vaccine, the virus spread exponentially.

Honey bee colonies experienced massive losses since the introduction of parasitic mites in the mid-1980s. The Varroa mite is especially harmful to bees because it vectors numerous viruses. One way that Varroa mites are spread between honey bee colonies is by having hives in close proximity. Separating hives, like separating people, helps reduce the spread of viruses. An interesting study of Israeli Acute Paralysis Virus describes a mechanism that the virus employs giving it a reproductive advantage, https://www.sciencemag.org/news/2020/04/deadly-virus-turns-honey-bees-trojan-horses. Jon Zawislak states, “There’s a fascinating and frightening arms race between bees and viruses. The biologist in me thinks “Wow!” but the beekeeper in me cringes.”
--Richard

Posted by Richard Underhill at 1:11 PM No comments: