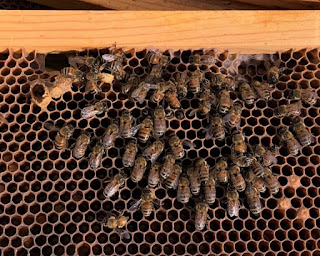 On a warm mid-winter day, a beekeeper observes numerous dead bees on the ground outside one of his hives. Inside the hive, he finds a small cluster of dead bees with many of the dead facing head-first into empty cells. A dead queen bee is located in the center of the cluster of bees. There is an empty supersedure queen cell adjacent to the cluster of bees with a trap door still attached, a tell-tale indication that a virgin queen has recently emerged. A queen that emerges in the winter is of no use to the colony because she will not be able to successfully mate with drones. There is no honey in the vicinity of the cluster of dead bees. A few capped cells indicate that the bees had been attending brood before the bees died. It appears that the bees died of starvation. With a relatively mild winter, the bees had been able to fly from their hive on a number of days; however, on their foraging flights, the bees hadn’t brought in enough food to meet the needs of their expanding colony.

Starvation is the greatest killer of honey bee colonies. They die because they don’t have food available to the cluster of bees. This often occurs even when there are ample stores of honey in the hive, but it is beyond the reach of the winter cluster. The cluster remains on the combs containing brood to feed and protect the fragile, developing bees. They eat the food nearby, as they did in today’s photo by George Bujarski. On prolonged periods of cold, the bees will not move throughout the hive to gather stored honey. Because honey bees share their food, they starve together. Since this colony exhibited no signs of disease, like American foulbrood, it will be safe for the beekeeper to reuse the hive and frames of drawn combs. He will protect the combs from hive scavengers till replacement bee colonies are available in the spring.
--Richard
Posted by Richard Underhill at 7:37 PM No comments: 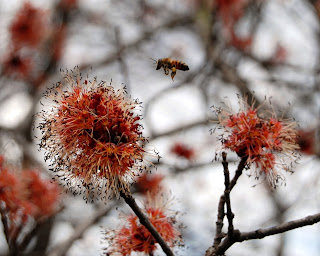 Local beekeepers took advantage of above-average January temperatures to check their hives. One found his hives full of bees and brood and, fearing swarming, asked me if he should split the colonies. I recommended that he wait while making sure that they have plenty of stored food and hive capacity. February is too early to divide colonies in central Arkansas. The bees, which are now protecting brood, need to have strong winter colonies to provide cluster warmth. Also, commercially produced queens are not available in the winter, and it’s a long time till colonies will be able to make their own queens. I suggested to the beekeeper that if he wants to increase his hive count, he should wait until there are plenty of drones walking on the combs before making splits. I like to see large numbers of adult drones on the combs to tell me when it is time to produce queens. With brood production increasing, colonies will continue to expand, experiencing an increased demand on their dwindling supply of stored honey. The maximum stressful situation will occur in March. As we approach March, colonies have large populations of bees, little natural forage, and no queens available.

With the beekeeper’s concern that his bees were crowding their hives, I suggested that he should try to suppress the bees’ urge to swarm by making sure that the colonies have plenty of hive capacity. He could, on a fairly warm day, add another box of drawn comb atop the existing hive bodies. Frames of capped honey should be placed directly above the brood nest. Since bees move upward in their hives over winter, when spring approaches, he can reverse the hive bodies to expand the available brood area. Warm weather in winter affords bees the opportunity to forage red maple, as in today’s photo. Red maple is a good source of pollen and nectar; however, in many years, cold or rainy weather prohibits bees from foraging this early-blooming tree.
--Richard

Posted by Richard Underhill at 12:50 PM No comments: