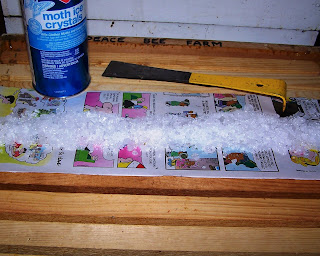 The best way to protect honey comb is to keep it in a hive occupied by a large, healthy colony of honey bees. The worker bees will constantly clean the comb and remove the eggs, larvae, and adults of attacking pests. Wax moths lay eggs in the seams between the boxes that make up the bee hive. These are common flying moths that are present anytime except during extremely cold weather. Their larvae crawl through the seams and enter the hive. The bees in a strong colony will catch and eat the larvae. In a weak colony, the wax moth larvae may have the opportunity to find cells filled with protein-rich pollen to eat. Once these bee hive scavengers have a foot-hold, they can destroy the honey combs, leaving a tangle of woven webbing and feces.

At times it is necessary to store the frames of brood comb in a building away from the bee hives. The frames that have been used by bees to raise brood are particularly vulnerable to wax moth damage because they contain considerable food in the form of pollen, honey, bee bread, and silk cocoons spun by the pupae. The developing wax moth larvae need this food; they can’t live on beeswax comb alone. Without bees to protect the comb, it is quite vulnerable to damage from wax moths. Moth crystals made from PDB (paradichlorobenzene) kill larvae and adult wax moths. Never treat bee hive equipment with moth balls; they are another chemical which is not acceptable for bee hive use. The crystals may be placed on strips of newspaper, as in the photo, atop the frames in tightly stacked hive boxes. Place a cover above the boxes. The crystals evaporate, and the heavier than air vapors sink to the floor, killing all stages of wax moth except the eggs. After storage on moth crystals, it is necessary to air out the frames for several days before placing them in use in a bee hive.
--Richard
Posted by Richard Underhill at 7:05 PM