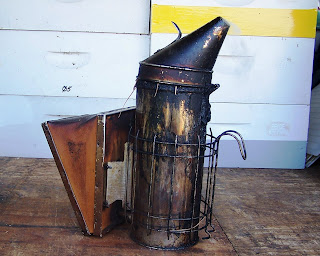 Paintings in Spain dating back at least eight thousand years show men harvesting honey from bees living in cavities in cliffs. These honey hunters carried smoking torches to help control the honey bees. From the earliest recorded images it appears that man has used smoke while working with or robbing honey bees. A common explanation for the use of smoke proposes that the honey bee, whose natural home is a hollow tree, perceives the smoke as a warning that the woods is on fire and that evacuating the tree is imminent. A more likely occurrence is the smoke interferes with the bees being able to detect the odor of alarm pheromone spread through the hive by the guard bees. No matter what the reasoning behind the effectiveness of smoke in beekeeping, the result is the same. If properly applied, smoke tends to calm the honey bee colony. When bees have been smoked, many of them will immediately begin sucking up honey into their honey gut. It is this action that leads some to believe that the bees are preparing to move in advance of the fire.

The smoker used by most beekeepers today is virtually identical to the smokers built in the mid-1800s. The smoker was one of four inventions of the 1800s that led to the beekeeping industry that we know today. These were the removable frame bee hive, foundation for the bees to use to build honey comb, the extractor to remove honey from the comb, and the smoker. If you look at the smoker that I use daily, you can see that it is made of a metal firebox and a wood and leather bellows. The bellows is similar to the one used to fan the fire in blacksmith shops. A smoldering fire emits a cool smoke and calms the bees. If too much smoke is applied, it has the opposite effect; the bees are angered. I burn readily available pine needles for smoker fuel.
--Richard
Posted by Richard Underhill at 8:00 PM