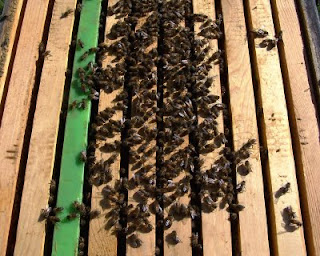 One of the reasons that honey bees have been so successful at occupying diverse territories is that they maintain the environment within their nest. Swarming bees begin by selecting a cavity of the appropriate size, about 40 liters. The bees varnish the new cavity with a thin coating of bee glue, called propolis, to seal cracks and make the nest somewhat waterproof. Next, the worker bees begin building sheets of beeswax comb in the cavity. The colony raises brood and stores food in the cells of the comb. The worker bees control the internal environment of the hive. Anytime during the year that brood is being produced, they maintain a hive temperature of about 95 degrees.

When outside temperatures drop in the fall, the bees form a cluster inside the hive to maintain heat. The cluster generally maintains a temperature of about 68 degrees. The queen bee stops laying eggs and rests in the center of the cluster. Clustered bees actually generate heat by eating their high-energy food, honey, and then vibrating their flight muscles to raise their body temperature, a unique feat for an insect. The cluster also adjusts its internal temperature by expanding or contracting as needed. However, if the outside air temperature is very cold, the bees must consume greater amounts of honey to warm the cluster. The bees are not wasteful; they don’t attempt to warm the hive space outside the cluster of bees. The structure of the honey bee nest is itself very favorable for winter survival. The sheets of comb make good insulation. As the honey is eaten from the cells, the cells of dead air become an exceptionally effective barrier from the cold. However, during very cold weather, honey bees often cannot break away from their tight cluster to feed. The colony may starve, even when honey is available nearby. Click the picture. Opening the hive on a cold morning, I disturbed a late fall cluster of bees.
--Richard
Posted by Richard Underhill at 10:37 PM