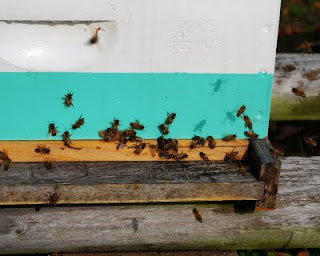 The winds changed directions today. A southerly wind brought warmer conditions, and the bees were able to break out of their cold-weather cluster and fly from their hives. As soon as the air warmed, bees poured from the hives for cleansing flights. Honey bees generally don’t fly until the air temperature rises to 50 degrees. Cold weather for the past few days has held the bees in their hives. After several days of confinement, the bees were ready to make a cleansing flight to eliminate their body wastes. Honey bees never defecate inside their hive. This is one of their behavioral traits that serve to help prevent disease from spreading through the colony. Honey bees maintain a clean nest as a healthy place to raise their brood and store honey. Worker bees varnish the hive and seal cracks and openings with a coating of antibacterial and antifungal propolis bee glue. Worker bees clean debris from the hive and guard bees attack and kill intruding wasps, hornets, yellow jackets, and honey bees from foreign hives. Workers remove these dead insects as well as honey bees that die within the hive. Sick bees leave the hive to die, and diseased bees are turned away at the hive entrance by guards. Strong colonies remove the eggs and larvae of wax moths and small hive beetles from cells and out of the way corners of the hive. If a mouse finds its way inside the hive, guard bees sting and kill it; then, workers entomb the mouse in propolis.