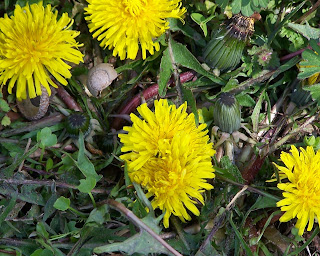 Dandelion is often the first wildflower to bloom in January and the last to bloom in December. This prolific flower can be found blooming in lawns or open areas during any month of the year. A native of Europe, the dandelion is a member of the composite or sunflower family. The composites are important bee plants, as many of them produce significant amounts of nectar and pollen. Dandelion gets its name from “dent,” or tooth, of the lion due to the shape of the leaf with points and indentions resembling a lion’s teeth. The leaves can be eaten as a salad green. The roots can be eaten or fermented into wine. Deer browse the plant. Dandelion is a hearty perennial plant with a deep tap root, but it can be easily propagated by wind-blown seed after the flowers have been pollinated by bees. Dandelion is important to the honey bee, because it is often the only plant in bloom either early or late in the year. A colony of bees desperately low on honey stores may find some nectar from dandelion on a warm day. On any day that the temperature rises to 50 degrees to allow the bees to fly, there will likely be some dandelions in bloom. Weather conditions like we typically encounter in mid-December here in the Arkansas Delta with daytime temperatures allowing the bees to fly, lead to consumption of large amounts of stored honey. Flying in search of nectar often consumes more energy than the bees expend if held in the winter cluster.