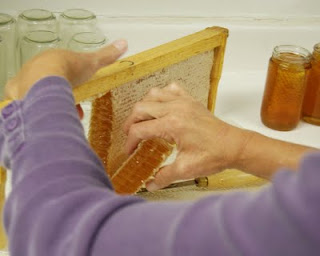 European cave paintings showing men risking their lives while climbing cliffs to gather honey while alerted bees circle these determined men holding smoking torches illustrate that man has sought out honey bees to rob their nests for thousands of years. Honey is the only food that we have today that is unchanged from that product of the honey bee that the cave men ate. Until the invention of the removable frame bee hive by Philadelphia, Pennsylvania minister Lorenzo Langstroth in 1851 and the subsequent invention of the honey extractor, all methods of gathering honey were destructive of the colony or the comb. Those robbing bees would usually kill the colony of honey bees with smoke and fire and then remove the combs of honey from the hive. Other men, practiced in robbing bee hives, would use smoke to calm the bees and then gently remove chunks of comb with honey by hand to be eaten. They ate the beeswax comb and the honey. If one wanted to remove the honey from the comb, the comb would be pressed. Even today, pressing the comb is a major method of collecting honey throughout the world.

Long after the invention of the removal frame bee hive there continued a tradition of hunting for bee trees. People would track foraging honey bees throughout the year and follow them back to their nest in a hollow tree. They would usually wait till cool weather, cut the tree to expose the honey bee nest, and remove the honey comb. Following this tradition of collecting honey in the comb, many people enjoy eating their honey this way. Today, most honey is extracted from the combs, and then the frames of comb are stored over winter to be returned to the bee hives for the next year’s honey crop. In the photo Rita is preparing cut comb honey. The combs may be enjoyed on hot buttered biscuits or on ice cream.
--Richard
Posted by Richard Underhill at 9:31 PM