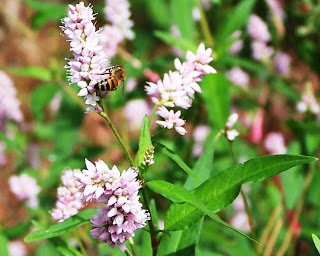 The Wolf River winds its way across western Tennessee and through the city of Memphis before spilling into the Mississippi River. This tributary, known in past years for its odor and pollution from sewage and industrial waste, has been restored to a beautiful stream by years of efforts by devoted conservationists. Mary Phillips and I made a presentation to interested neighborhood environmentalists about the relationship between honey bees and trees as a part of a day’s event to celebrate the transformation of this river to an urban greenspace corridor. Peace Bee Farm participated as part of an effort to encourage the expansion of tree planting. The portion of the greenspace that we occupied was an abandoned railroad line that had been converted from an overgrown path used by vandals and burglars. The combined efforts of this Midtown Memphis community had turned this into an extended park. A receptive group joined Mary and I to learn about honey bees and other pollinators. Others present included master gardeners and tree experts. The Memphis Zoo sent butterflies. Children joined in for a bike parade along the corridor.

Smartweed, also known as pinkweed, is coming into bloom in the Delta. This relative of buckwheat grows in damp soil and may be found in abundance along drainage ditches and canals. Damp fields may appear pink from smartweed in bloom. Smartweed along with other fall flowers, especially bitterweed and asters, produces robust honey which is often used in processed foods and baked goods. We are fortunate to have a strong smartweed nectar flow to provide our bees with stores of honey for their winter use. Pioneers boiled smartweed foliage to produce a liniment to treat a horse or mule with a sore or lame leg. Such an injury was said to “smart.”
--Richard
Posted by Richard Underhill at 11:30 PM