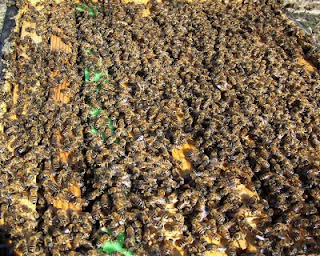 Honey bees born in the spring and summer have a different physiology from the bees born in the fall. The bees that live in the warm seasons live from five to six weeks. Honey bees born in September and October, however, can live for up to six months. The considerable difference in the life expectancy of the fall bees is due to differences in physiology and lesser flying in the winter. In the spring and summer, the colony produces great numbers of bees to exploit the available flowers. Young bees spend the first three weeks of their lives in the hive performing a series of jobs related to their age. Their first job is cleaning the cells of the brood nest. Their next job is feeding the larvae. This job follows the development of the young worker bees’ glands that produce the larval food. The queen bee must continue to lay eggs during the early fall in order for there to be workers to feed the brood during next February and March.

An inspection of the bee hive in the late summer and early fall should find a large population of bees. The first indication of the population of the hive is a number of bees on the inner cover of the hive. If the hive is healthy and there is a prolific queen laying eggs, the hive will have bees spilling over the tops of the frames as well. That is the case in the picture of a hive with its large summer population. The majority of these bees will die before the end of winter; only bees born in the fall will be available for feeding the colony’s brood at the end of winter. To ensure that there will be long-lived bees with highly developed food-producing glands, the beekeeper often provides supplemental feeding to encourage the queen to continue laying eggs into the fall.
--Richard
Posted by Richard Underhill at 9:16 PM