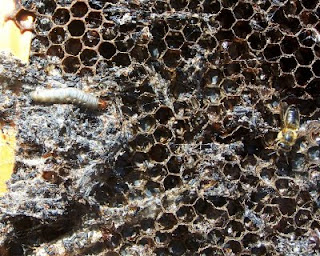 Wax moths never kill a colony of honey bees; but if a colony dies, the hive will likely be taken over by wax moths. Moths are constantly attacking honey bee colonies. Some attempt to enter the hive through the entrance which is protected by guard bees. Other moths have greater success when they light on the bee hives at night and lay their eggs in the cracks between the boxes that make up the hive bodies and honey supers. The larvae, moths in the second of four stages of development, crawl through hive cracks and enter the hive. Strong hives have no problem with wax moths. They have worker bees that detect the intruding moth larvae and eat them. Strong hives also have plenty of worker bees dedicated to sealing the nest with propolis to keep moths out. The wax moth larvae grow rapidly on honey, pollen, and comb left in a hive after the bees have died. They burrow through the comb, often in diagonal lines across the frames. Frames attacked by wax moths are easily recognized by the webbing that covers the frame. In the photo we see the damage left by wax moths. A larva crawls across the frame as does a robber bee. Robbers often appear black and shiny with the hair missing from their abdomens from fighting. The small, black rectangles are the waste of the wax moth larvae. A diagonal larval tube tracks across the lower, left side. As the wax moths continue their development, the larvae spin cocoons and eat into the hive wood, leaving indentions that make the hive look like it has been hammered.

While the damage done to hive frames by wax moths is obvious, the wax moth actually serves a useful purpose. By destroying the hives of colonies after they die out, the wax moth helps control the spread of numerous bee diseases, especially the highly contagious American foulbrood
--Richard
Posted by Richard Underhill at 9:32 PM