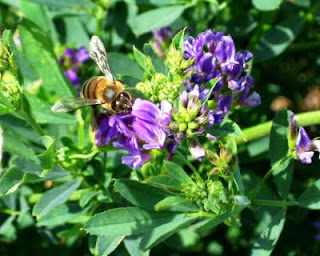 Honey bees are of utmost importance in the production of our food. One third of mankind’s diet is dependent upon insect pollinators. Without pollination, these food plants would not produce fruit and seed. Not only do the honey bees and native pollinators help produce our food, they also help produce food for wildlife and farm animals. Alfalfa, considered the world’s most important forage crop for animals, is grown in the Mid-South as a high-quality feed for horses and cattle. The alfalfa plant may be harvested up to five times per year for high-protein hay. Between cuttings of the hay, the alfalfa may bloom and attract honey bees.

Alfalfa is a perennial plant in the important family of bee plants, the legumes. From alfalfa, the bees collect both nectar and pollen. There is one problem that the honey bees encounter in working alfalfa flowers, though. The structure of the alfalfa blossom hides the nectar and pollen from the foraging bee until the flower is physically tripped by a bee. To access the alfalfa pollen and nectar, the bee must press its head against the flower petal until the flower’s male and female parts are exposed. In this process, the flower slaps the bee directly in the face. Understandably, many nectar-gathering honey bees dislike the tripping mechanism of alfalfa. They soon learn to insert their tongues between the petals to remove nectar without tripping the flower. These bees, as a result, don’t pollinate the alfalfa. Pollen-gathering honeybees are effective pollinators, however; because they must trip the flower’s mechanism. Click on today’s photo to see a honey bee negotiating an alfalfa flower. Alfalfa honey is clear to light amber in color with a pleasant, minty flavor. Alfalfa honey has a heavy body and weighs 12 to 13 pounds per gallon while other honeys rarely exceed 12 pounds per gallon.
--Richard
Posted by Richard Underhill at 12:46 PM