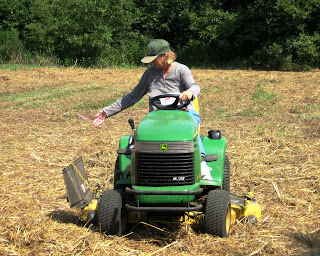 In beekeeping, one must be constantly making preparations for activities well in advance. Even though we are harvesting summer honey now, we are also making preparations for raising queen bees to use in next year’s colonies. One of the surest ways to have success in getting honey bees to start queen cells is to have a good nectar flow. To have plenty of nectar flowing in the vicinity of the queen production hives, we plant clover on any available pieces of land. In the picture, Rita helps by sewing ladino white clover by hand. Ladino is a popular variety of large clover from northern Italy. Clover, a cool-season crop, may be planted in the fall or spring. Evening temperatures in the 60s usually ensure the greatest planting success, as there is little competition from grasses and other plants. Clover is the most widely used honey producer in the world; and it is a legume, one of the important families of honey bee plants.

The clover that Rita plants today should germinate this fall and produce numerous flowers next spring. The plants won’t actually produce much nectar until the following year, though. Clover produces the greatest amount of nectar when daytime temperatures fall between 80 and 90 degrees. Along with feeding the honey bees, the cover crop of clover enriches the soil and feeds wildlife. Bacteria living in nodules on the roots of the clover convert nitrogen in the atmosphere to usable nitrogen in the soil. The clover plants will be heavily browsed by deer. Deer now visit Peace Bee Farm bee yards at night, returning in recent years after an absence of 80 years. With most of the Arkansas Delta cleared for row crop production, deer disappeared in many areas. They are making a come-back now. I feel like the pruning of the clover plants by the deer keeps the clover healthy and productive.
--Richard
Posted by Richard Underhill at 9:36 PM