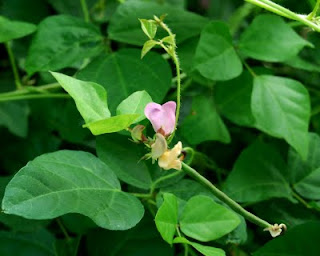 Both humans and wildlife depend greatly upon the honey bee to pollinate plants so that they can produce fruit and seeds. Many game and songbirds consume a diet primarily comprised of seeds. One of the plants that provide large quantities of seed for quail and turkey is beggar’s lice, or tick trefoil. This common plant of wood margins is well-known by all who spend time outdoors in the late fall. The seeds of beggar’s lice are sticky triangles that adhere to clothing. Beggar’s lice has a very effective method of transporting its seeds to other locations. The seeds stick to the fur of mammals which may carry them great distances. Not only do numerous birds eat beggar’s lice seeds, the plant is readily browsed by deer. The beggar’ lice plant is a low vine with three leaves and a pink flower. Beggar’s lice belongs to the important bee plant family, the legumes. Other legumes include soybeans, clovers, vetch, redbud trees, and cultivated beans and peas. Throughout the summer, the beggar’s lice plant is a lush, low vine with three leaves, pink flowers, and developing seed pods. The plant clearly resembles the peas of the legume family. In the late fall, after the leaves have fallen from the vine, the plant seems to have disappeared. The only evidence of the plant is the lines of seeds clinging tightly to ones clothes.

Some of the nature trails that I maintain through the woods in Peace Farm are lined with beggar’s lice. This legume performs an important role in feeding a number of wildlife species; and, through pollination, the honey bee plays an important role in reproducing the plant and producing its seed as wildlife food. I’ll try to remember that while I’m picking hundreds of seeds off my clothes after a hike through the woods this fall.
--Richard
Posted by Richard Underhill at 9:57 PM