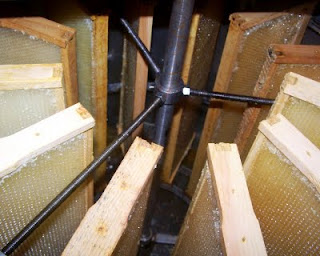 The honey extractor was one of several great beekeeping inventions that came along in the Mid-1800s. The extractor made the collection of honey a non-destructive task. Previous methods of gathering honey always destroyed the honey comb. Some common methods of collecting honey killed the colony. It was common for groups of people to identify trees with bees living inside in a cavity. The tree would then be cut and the cavity exposed. The bees would be smoked and the comb removed. The comb would be pressed to release the honey. The honey would then be filtered through cheesecloth to remove debris and particles of beeswax. Pressing the honey out of the comb could liquefy proteins if there was any brood present. This altered the taste of the honey and made for a less than pure product.

The 1851 invention of the modern removable frame hive by Reverend L. L. Langstroth, a Philadelphia, Pennsylvania pastor, made honey collection practical. With the new invention, frames of honey, capped in beeswax, could be removed from the bee hive. In the Langstroth hive, honey was stored separately from the brood, separated by a queen excluder. This arrangement eliminated the problem of proteins entering the honey. The cappings were removed by cutting or scratching. Next, the frames were placed in a honey extractor which Langstroth developed in 1867. The extractor spun the frames and removed the honey by centrifugal force. Early extractors were hand operated. Now many employ electric motors. The photo shows frames of honey glistening as the thick liquid honey is spun out. The pure honey is collected, and the frames and honey combs are saved for the bees to use again.
--Richard
Posted by Richard Underhill at 9:56 PM