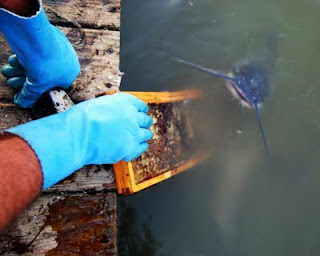 International travel and trade regularly bring plants and animals into the country as accidental imports. Removed from their natural predators or controls, these plants or animals often grow rapidly in their new environment. The small hive beetle is an invasive species that entered the United States about 10 years ago. Aided by the transportation of migratory honey bee hives on trucks, the small hive beetle spread across the U.S. in short order. The small hive beetle was truly not a welcomed addition to American beekeeping, which was already in serious decline largely due to the effects of parasitic mites which entered the U.S. in the 1980s. The adult small hive beetle is an insect with a hard outer covering which protects it from the honey bees, allowing the beetle to live inside the bee hive. The beetles reproduce rapidly in a hive that is queenless or in stress. When the beetles reproduce, it is the larval stage of the small hive beetle that is extremely damaging to the honey bee hive. The larvae eat everything in the hive, leaving behind a “slimed” waste covering the badly damaged combs. The slime, which has the odor of rotting oranges, repels honey bees and attracts small hive beetles. The beetles can drive the honey bees from their hive in merely a few days.

To help control the beetles, it is important for the beekeeper to prevent the small hive beetle larvae from leaving the hive and entering the soil where they continue their life cycle as pupae. Whenever we find a slimed bee hive, we place all of the frames in heavy plastic bags to prevent the larvae from entering the soil. Lightly damaged frames can be frozen to kill the beetles and then washed in water and returned to the bees. Heavily slimed frames must be completely cleaned of all comb. In the photo you can see catfish helping take care of the hive residue. These scavengers eagerly eat the honey comb, fermented honey, protein-rich pollen, and worm-like beetle larvae.
--Richard
Posted by Richard Underhill at 10:43 PM