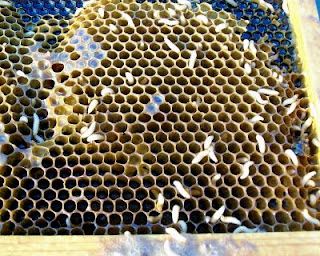 The small hive beetle probably entered the United States like many invasive species as a stow-away in a cargo ship. The unintentional migration of this honey bee pest from Africa occurred about a decade ago. The beetle entered the Arkansas Delta about 2004. As the beetle is virtually unchecked by any natural predators, it spread rapidly to almost all parts of the country. This invader is thought to be capable of flying for miles, and it is moved with migratory bee hives on trucks.

The small hive beetle is an opportunistic invader of bee hives. The adult beetle, about a third the size of a lady beetle, can live inside the bee hive, protected from the bees by a hard covering. The beetles often occupy a healthy hive and wait to move to a weakened, stressed, or queen-less hive. The small hive beetles are attracted to a stressed hive by the alarm pheromone given off by honey bees. Inside the stressed hive, the small hive beetles lay eggs. The beetles develop through a full four-stage metamorphosis like the honey bee. It is the second stage of the small hive beetle’s development that damages the honey bee hive. The small hive beetle larvae eat everything in the hive: comb, brood, pollen, and honey. They turn the hive into their waste, a wet, brown slime with the odor of fermenting oranges. The odor attracts small hive beetles from miles around and repels honey bees. Bees will abandon the slimed hive, often in a manner of a few days. Click on the photo of small hive beetles starting to take over a queen-less hive. The first sign of trouble that I detected was bubbles developing in the fermenting honey in the supers above the brood nest. Fermenting honey is in the cells to the upper left. Caught early, before the combs are slimed, the beetles may be killed by freezing the frames.
--Richard
Posted by Richard Underhill at 10:26 PM