Grain Sorghum in the Delta 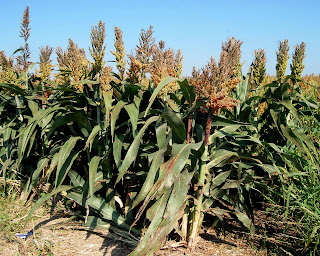 Grain sorghum, also called milo, is a cereal grain grown in the Arkansas Delta. In places, large tracts of the short, heavy-bodied plants grow. The plants are topped with large seed heads. Grain sorghum is used in the production of food, fodder, sorghum molasses, alcoholic beverages, and biofuels. Grain sorghum, like rice, wheat, and corn is a grass. The grasses are wind pollinated and don’t need insects like honey bees for pollination. They therefore don’t need to offer nectar or pollen to entice bees. The other two major crops of the Delta, soybeans and cotton, are flowering plants. They both offer the honey bees a reward of nectar and pollen to attract the insects for pollination, a necessary step for seed production and plant reproduction. Soybeans and cotton are major sources of nectar for honey production. The acreage planted in grain sorghum—or rice, wheat, or corn—is like a desert to the honey bee. A bee flying over a large grain sorghum field will find nothing to eat or bring back to the hive.

Farming in the Arkansas Delta is an example of modern industrial agriculture. It is highly efficient in producing large amounts of high value food and fiber crops. For the honey bees and other pollinators, the modern farm can be a harsh environment. Large tracts of a single plant offer little forage except during the short time that that particular crop is in bloom. If the crops are grasses, the crops offer no food to the pollinators. Modern farm fields are often designed without a weedy margin. The crops are planted to the very edge of the field and borders are maintained without weeds. This arrangement often results in a shortage of year-around food and habitat for the pollinators. Information on protecting the pollinators can be found on the National Academy of Sciences web site: http://dels.nas.edu/pollinators/.
--Richard
Posted by Richard Underhill at 10:08 PM