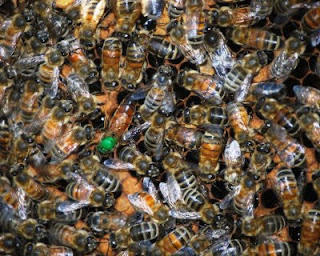 In the summertime, hive inspections are made less frequently. Because the honey supers are placed atop the hive bodies, it may mean moving hundreds of pounds of equipment just to get to the brood nest. By August, the hives have between two and six medium-size honey supers in place. Each super may weigh up to sixty pounds. The heat and humidity in the Delta are true limiting factors in the beekeeping task. Still, there are times when it is necessary to look into the brood nest and evaluate the hive. If there are dead bees on the ground in front of the hive or a lower than normal population of bees inside the hive, a thorough inspection hive is made. This year’s excessive number of rainy days made for some sporadic nectar flows. Some nectar producing plants just didn’t produce nectar during their bloom period simply because the cloud cover reduced photosynthesis. During these times of dearth, some bees, particularly those of Eastern European lineage, revert to survival instincts and stop brood production. These cool-climate races of bees survive during long winters and nectar dearth by stopping brood production, which consumes large amounts of food.

Click on the photo, taken in the brood nest of a hive showing a low population of bees in the honey supers. There are plenty of bees in the brood nest area. All three castes of bees can be found: workers, drones, and the queen. A drone is in the upper, right quadrant; the queen, marked in green, is to the left of center. Capped brood, holding pupae, is present; but there are no eggs or open larvae to be found. It appears that the queen has not been laying eggs for at least nine days. This colony should survive. With a strong nectar flow from fall wildflowers, or my supplemental feeding of sugar syrup, the queen should start laying eggs again and replenish the colony population. This year’s honey crop will be diminished, though.
--Richard
Posted by Richard Underhill at 9:47 PM