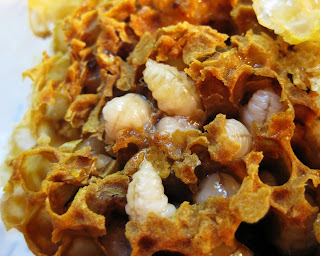 Honey bees build their nest in an orderly fashion. The cavity space is occupied by honey comb built to fill the available space. Sometimes the comb is in straight, parallel sheets. At other times, the comb is placed in globs, or bumps, or in connecting sheets perpendicular to the main sheets. Honey bees will typically build 10 to 15 percent of their nest into these irregular structures, called burr comb. It is in the burr comb that the bees prefer to produce their drones. Worker brood comb and honey storage comb measures five cells per inch. Drone brood comb measures four cells per inch. Anytime that honey comb is damaged in the hive, the bees build new comb in the larger drone cell size. In the picture, Shirley Murphy photographed a piece of burr comb that was damaged during removal of a frame. The damage exposed drone pupae developing in the cells.

At Peace Bee Farm we place one frame of drone brood foundation in each hive body to give the bees a guide toward building 10 percent of their brood nest in drone comb. The drone brood comb is used in several functions as part of our integrated pest management program. Parasitic mites can be counted in the drone brood, and mites can be eliminated by freezing the frames of drone brood. Unwanted genetic behavioral traits, like excessive defensiveness, can be reduced as well by freezing the drone brood. Also, we can concentrate our best genes by using the frames of drone brood for drone bee saturation. A side benefit of using drone brood foundation is a cleaner hive. Since the bees have 10 percent of their drone need accomplished, they don’t build much burr comb in the hive. Burr comb does not always look good to us, but to the bees it is an important part of their nest.
--Richard
Posted by Richard Underhill at 10:16 PM