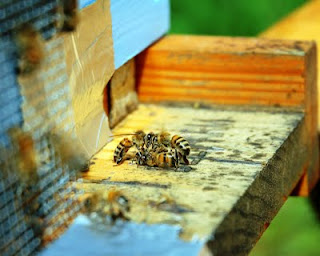 From the time that honey bee workers emerge as adults, they progress through a series of hive jobs to help care for the colony. The bees have glands which enable the bees to perform various functions, and the bees’ jobs change as their glands develop. When the workers are about 21 days old, the venom in the sting is at its maximum potency, so they serve the hive as guards for a few days. Guard bees stand at the hive entrance on their back four legs with their front legs raised. The guard bees inspect every bee entering the hive. Bees entering the hive allow the guard bees to examine them with their front legs and antennae. The guard bees can determine if a bee belongs to its colony by the bee’s odor, as each hive has a distinct odor. Worker bees that belong to the colony are allowed to enter. Most any drone bee is allowed to enter as well. Also, almost any bee approaching the hive with a load of nectar or pollen is allowed to enter. The colony doesn’t mind accepting a free gift of food from a bee mistakenly entering the wrong hive.

The guard bees will sting and remove foreign intruders, such as bumble bees, wasps, and yellow jackets. They will also sting and attempt to drive away intruding skunks, raccoons, and beekeepers. The guard bees can extend their sting and release alarm pheromone to attract other guard bees if needed. Brandon Dill photographed three guard bees stinging an intruding honey bee at the entrance to one of our queen mating nucleus hives. The hive is equipped with a screen across the entrance to give the guard bees the advantage over robber bees. Guard bees play a most important role in protecting the colony. Other work by beekeeper and photographer Brandon Dill may be seen at http://www.brandondillphotography.com/.
--Richard
Posted by Richard Underhill at 10:51 PM