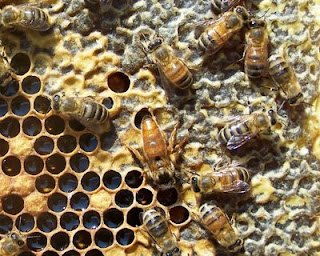 While examining bee hives, I found one colony in need of a new queen. Every hive needs a healthy and productive queen. Without a highly productive queen a colony cannot grow to the size necessary to produce a surplus of honey or effectively pollinate crops. Honey bees never help out other colonies that are in trouble, but beekeepers regularly do. I looked in a nearby hive for a frame of young brood to borrow and add to the weak hive. I hoped to find brood at the youngest larval stage that the bees could use to raise a new queen. On day four of development, honey bees can create a queen bee by feeding the larva a diet of royal jelly. However, I couldn’t find any brood of the proper age.

With a strong nectar flow, the hive had become honey-bound; all available cells were filled with honey. The bees filled cells that the queen would normally use for egg laying with incoming nectar, a common occurrence this year. I did find a fully developed queen cell on a frame, which I decided to move to the colony in need of a new queen. A colony will usually accept any queen that emerges in its hive. After carrying the frame by hand a short distance to the new hive, I gave the queen cell a final inspection. The cell was empty; the queen had emerged while I held the frame in my hands. Click on the picture to see a new queen, one minute old. The hair on her body still appears wet. On the frame from the honey-bound hive she walks past cells of capped brood on the left. The cells of recently emerged bees have been immediately filled with honey. The darker area to the right of the queen is fully-ripened honey in cells capped with beeswax.
--Richard
Posted by Richard Underhill at 2:53 PM