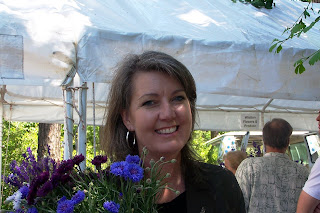 There is a considerable interest among many for us to return to foods produced locally as opposed to those readily available in grocery stores. These foods may have been imported from great distances. People are attracted to local foods because they may be fresher, more flavorful, or more healthful. More varieties of produce may be available, such as delicious, but fragile, heirloom tomatoes. In many cases local production of food is favored as a means of supporting the local agriculture and economy. Each of these incentives combines to make farmers markets increasingly attractive. Local chefs arrive early to shop for fresh produce to include in the day’s menu. They know that not only is the produce fresh, it is fully mature or ripened. Varieties not available in groceries can be found in farmers markets.

The first time I talked to Melissa Peterson was when news stories broke regarding the mysterious disappearance of honey bees, now called Colony Collapse Disorder. She called from Portland, Oregon. Minutes later, I was interviewed by news media from Savannah, Georgia and in the Mid-West. With coast to coast media coverage, I kidded Rita that I might have to get an agent. Melissa Peterson, the editor of Edible Memphis magazine, is one of the energetic and effective voices supporting the move toward local foods in Memphis and the Mid-South. Her quarterly magazine approaches foods of the region in each of the seasons. She helps build ties between restaurants, chefs, bakers, farmers, and those who merely enjoy food. Melissa is an advocate for the slow food movement. Yes, that’s the opposite of fast food. In The University of Memphis’ continuing education program Melissa teaches interested cooks how to properly use their chef’s knife. She is a regular, friendly face at local farmers markets, and she always has with her a basket of fresh produce or a bouquet flowers. A subscription to Edible Memphis, with its colorful photography and articles can be obtained at: http://www.ediblememphis.com/. I enjoy reading it; Melissa is a pleasure to have around.
--Richard
Posted by Richard Underhill at 11:42 PM