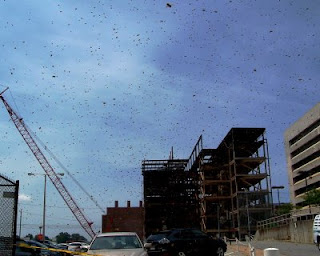 Honey bees are wild animals. If we, as beekeepers, forget this, we will soon be reminded. The honey bee has been around for millions of years, and it has been managed by humans for at least seven thousand years. It is, however, quite close to its ancient nature. Most aspects of honey bee behavior evolved to make the bee more survivable in an ever changing wild environment. Living in bee hives owned by beekeepers is only a recent luxury for this ancient insect. Beekeepers do try to have some control over the honey bee by selecting queen and drone bees from colonies having desirable traits. This selection of genetic traits to be passed along to offspring helps us regulate some of the colony’s behavior. The selection also helps us avoid certain bee diseases. Still, honey bees are not domesticated.

Tim Hagerty is a new beekeeper. He called me about a swarm of honey bees that was clustered on an iron pipe in an alley between two downtown Memphis hospitals. This looked like an easy swarm removal. The bees were so close to the ground that we could place a hive on the ground and brush the bees off the pipe into the hive. I sprayed some sugar water flavored with spearmint and lemon grass onto the bees to help calm them. Next, I readied the hive. This took only a couple minutes. Then, along came the diesel trucks, slowly backing down the alley. Before we could brush the bees into the hive, the bees took to flight. The swarming bees followed the cab of one of the trucks until it stopped at a loading dock. I took this picture as the bees flew away. We noticed a small remnant of the bees remained on the iron pipe. I found the queen and caged her. The swarm assembled on a sealed, third story window of the hospital. The swarm clearly appeared to be attracted to the moving truck. Maybe carbon dioxide from the exhaust pipes was the attractant. I introduced the queen to a queenless nucleus hive. The next morning, the swarm relocated itself to a tree limb at the other hospital. Tim combined those bees with a growing colony using a newspaper to slow the introduction. The hospital employees enjoyed seeing all of the activity. Tim and I learned that the wild bees don’t always behave as we intend.
--Richard
Posted by Richard Underhill at 9:29 PM