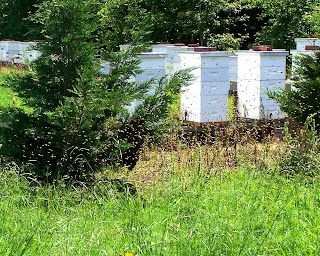 When honey bees swarm, it is an amazing sight. Thousands of bees fly around in a circling mass, evenly spaced. How do they avoid mid-air collisions? The bees fly quietly for several minutes then coalesce in a cluster hanging onto some convenient object. They often hang on a tree limb or bush, but they may light on a mail box or house. The honey bee’s six legs each have two hooks that the bees can use to hold onto their colony mates. This allows them to form a cluster, often the size of a pineapple or larger. While these thousands of bees are in the air, bees from surrounding colonies go about their foraging seemingly ignoring the swarm activity. The swarm event starts and ends rather abruptly and orderly. While impressive, if the swarming involves bees leaving one of your own hives, it is somewhat disappointing, however. If you don’t catch the bees, it amounts to a year’s investment lost and no prospects for a honey crop this year from this hive.

I was heading to one of our bee yards with specific plans of what I intended to do with the bees when I encountered this swarm of bees in the air. By the time that I could gather a spare bee hive, the bees were conveniently festooned on a low branch of an evergreen windbreak near the bee yard. In the picture you can see the swarm beginning to gather together on the evergreen. It is the dark mass on the lower right branch. By the time I had the hive stand prepared to accept this new hive, the weight of the bees bent the branch to the ground. After spraying the bees with a little sugar water to wet their wings and retard their flying, I shook the entire swarm into a hive body, making this a very easy swarm catch. Thus, I accomplished a colony division within my bee yard. The bees controlled the scheduling of the event.
--Richard

Posted by Richard Underhill at 11:34 AM