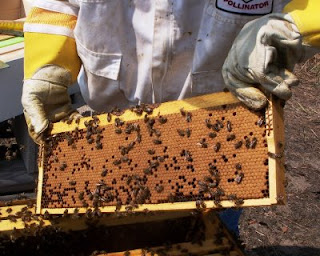 It is important to have a large population of honey bees in place to take advantage of a major nectar flow. An early summer inspection of the bee hives found most strong and ready for collecting nectar from the blooms of the Arkansas Delta’s flowering row crops. The primary two crops for honey bees to use to make honey are soybeans and cotton.

When inspecting the bees, we expect to find hives that are full of healthy bees. We can assume that we have a good queen by examining the frames in the brood area. We should find brood of all stages: eggs, larvae, and pupae. Under normal conditions, there will be roughly twice as many larvae as eggs and twice as many pupae as larvae. This distribution of brood stages results from the time that the brood exists in each stage of development: three days for eggs, six days for larvae, and 12 days for pupae. The pattern of the capped brood, which contains the pupae, tells us much about the queen and the health and condition of the hive. Click on the picture to see a healthy frame of capped brood from a strong colony. The light brown colored cappings extend across the entire frame in a continuous pattern with very few empty cells. Those empty cells probably indicate that we have a colony that has the ability to detect and remove parasitic mites growing in the brood cells with the developing larvae. The bees uncap the affected cell, remove the larva and the mites, and carry them out of the hive. This genetically-passed trait is called hygienic behavior. Using genetically mite-resistant bees with hygienic behavior is one of the key components of our integrated pest management program.
--Richard
Posted by Richard Underhill at 9:57 PM