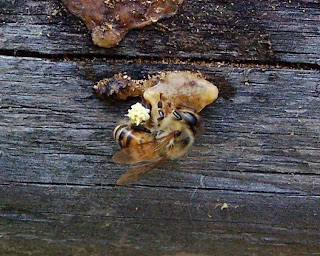 Honey bees bring four things into the hive: nectar, pollen, water, and propolis. Propolis is sometimes called bee glue. Honey bees collect the saps and gums of trees to make propolis. Propolis is a sticky substance with the texture of chewing gum found on the sole of your shoe. The bees use it to glue together everything in the bee hive. It is the reason that beekeepers use a hive tool to open the hive and remove the frames. The bees use propolis to seal every crack in the hive. When they first move into a hive or cavity, they varnish the inside surfaces with propolis, which has antibacterial and antifungal properties. As well as sealing cracks, the bees build structures with propolis to direct the flow of air through their nest. If a mouse gets into the bee hive, the bees will often sting it to death and then encase the dead body in propolis, thus protecting the hive from bacteria and odor.

Propolis has a number of human uses as well. A number of medications are made from propolis. It is also applied to the surface of certain musical instruments. It is thought that Antonio Stradivari used propolis in making his violins in the late 1600s. Click on the photo to see the honey bee collecting propolis. It is a difficult task, taking considerable time. The bee gnaws at the sticky tree sap with her mandibles to free flakes which she carries in her pollen baskets. The propolis is the yellow flakes on the bee’s hind legs. Once she returns to the hive, she will need the assistance of another bee to remove the sticky propolis from her pollen baskets. Even for the bees, propolis is almost as sticky as chewing gum.
--Richard

Posted by Richard Underhill at 10:14 PM