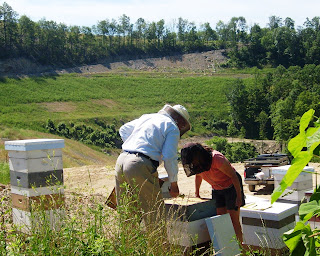 Tammy Horn is a soft-spoken beekeeper who has been able to move people who literally move mountains. Coal mining companies in the mountains of Appalachia have been increasingly employing a technique of mining called mountain top removal to extract coal without digging mine shafts. As the name implies, the tops of mountains are taken apart and the coal removed, leaving the rubble of remaining rock and soil. Following land restoration rules which were not designed to optimize the environmental effect, the coal companies restore the scarred landscape by pushing the rubble into contours. The rubble is then compacted using heavy machinery. Tammy, who grew up in Hazard, Kentucky and learned beekeeping from her grandparents, recognized the potential for using the restored coal mine land for beekeeping. There exists a need for economic development in Appalachia, and Tammy sees in beekeeping a potential cottage industry. The area is also the natural range for some of the best of the honey plants: tuliptree, black locust, and sourwood. Tammy helped convince the coal companies that they could alter their reclamation techniques to make the mountain soil suitable for growing nectar-producing trees and plants. The magnificent American chestnut is even being reintroduced into its native Appalachian range.

Go to http://planetgreen.discovery.com/travel-outdoors/coal-mines-bee-friendly.html to follow the great environmental work that the coal companies, universities, foresters, and beekeepers are doing to improve life and the environment in what Tammy sees as a “honey corridor” in Eastern Kentucky and West Virginia. She wants to put bee hives on the 33,000 acres of reclaimed coal mine land and establish “genetic islands” of honey bees. Today’s photo, taken by Alice Jones, shows Tammy Horn and her colleague, Allen Meyers, working bees at the James River Coal site near Hazard, Kentucky. There’s yellow clover in the foreground and sourwood in the margins of the forest. Tammy is the author of an excellent history, Bees in America: How the Honey Bee Shaped a Nation. I’m anxiously waiting for her next book.
--Richard
Posted by Richard Underhill at 8:43 PM