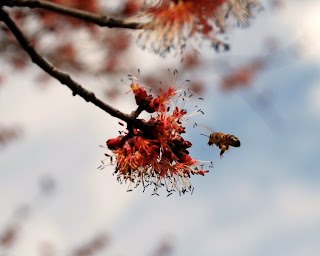 Whenever the weather permits the honey bees to fly from their hives early in the year, they often head to the low-lying lands and river bottoms. Here, they find the red maple, which is among the earliest blooming sources of nectar and pollen for honey bees. The red maple blooms from late January through March, and the scarlet flowers appear before the leaves. This early-flowering tree yields large amounts of pollen and a considerable amount of nectar. If flying conditions are favorable, large numbers of honey bees are attracted to the open flowers on the bare branches. However, the weather is often so cold and stormy that the bees are not able to take advantage of the abundance. Commonly found in the low ground above the banks of streams and rivers, the maples are important plants for the honey bee. They produce ample amounts of nectar and pollen necessary for the early start-up of the honey bee colonies’ populations. The red maple is followed in bloom by other maples. The silver maple blooms in February, and the sugar maple blooms in April. The box elder is a maple as well, and it blooms in April. The maples provide needed food for brood rearing, but the late winter colonies are usually too weak to harvest enough nectar to make a surplus of maple honey. The honey is described as having a fine flavor. Maple honey is white or amber colored with a faint pinkish tinge.

Following pollination by the honey bees, the maples produce great numbers of seed pods that have a wing that allows them to spin like helicopters. The seeds are distributed widely by the wind, and they settle into the rich silt fill of old oxbow lake beds to begin the cycle of bottomland forest growth. In this way the honey bee helps restore habitat for wildlife, large and small. Click on today’s photo of a honey bee carrying pollen collected from a red maple blossoms.
--Richard
Posted by Richard Underhill at 3:12 PM