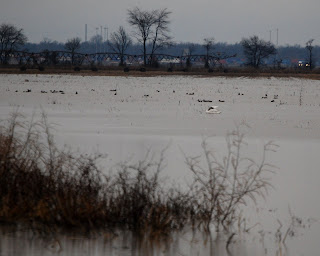 I sent a photo of the swan that I spotted yesterday to Van Harris who writes a regular article about birds for the Memphis newspaper, The Commercial Appeal. Van, a former president of the Memphis Chapter of the Tennessee Ornithological Society, said that it is likely that the swan was possibly not a trumpeter swan, but instead North America’s other native species, the tundra swan. As its name implies, the tundra swan lives in the arctic tundra. Its winter-time migration normally takes it to the East or West coast of the United States. Both birds are quite similar in appearance, with the tundra swan somewhat smaller in size. Van directed me to The Trumpeter Swan Society, a conservation group involved in restoration of the species that came very close to extinction in the early 1900s. You can view the group’s efforts at http://www.trumpeterswansociety.org/. I will continue to watch this swan and report it to the group. By observing new locations for trumpeter and tundra swan migrations, the group attempts to plan conservation efforts in the South. Habitat restoration efforts for swans benefit numerous other species. This single swan shared a large flooded rice field with hundreds of northern shovelers, mallards, and northern pintails. The wildlife that we observe serves as an indicator of the condition of our environment. The presence of waterfowl in particular illustrates the successful efforts of many concerned individuals and groups.

I am posting another picture of the swan, probably a tundra; I will continue to refine the identification. If you click on the picture, you can see the swan preening its feathers. Behind the magnificent swan are northern shovelers, beautiful ducks with broad bills. The wide-open expanses of the Arkansas Delta can be seen in this deceptive photo, taken in rain and low light. The upright light poles are located at a railroad terminal three miles in the distance. The heavy tree line is an old chute of the Mississippi River four miles away
--Richard
Posted by Richard Underhill at 11:12 PM