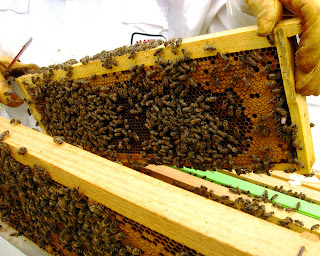 Reverend Lorenzo L. Langstroth made careful measurements inside natural honey bee nests. From his observations, Langstroth described the concept of bee space. He noted that the honey bees always build their nest with precisely spaced aisles between the sheets of beeswax honeycomb. These aisles, where the bees walk, measure between one fourth and three eights of an inch. Honey bees sometimes build their nest with straight, parallel sheets of comb; but, in nature, they often build a nest of twisting, folded sheets of comb. Regardless the shape of the combs, the bee space remains the same, roughly three eights of an inch, enough room for a bee to walk upright or two bees to pass shoulder-to-shoulder. With his concept of bee space, Langstroth designed the modern bee hive in 1851. The heart of the hive is the removable frame which holds the honeycomb. The frame is separated from all other surfaces, top, bottom, sides, and adjacent frames by one bee space of three eights of an inch. Langstroth noted that if there is an opening or crevice in the hive of less than a bee space, the bees will fill it with propolis, bee glue that they make from tree saps and resins. He also noted that spaces in the hive that are greater than a bee space are filled in with honeycomb, either full sheets of comb or oddly shaped burr combs.

The Langstroth bee hive offered such flexibility to the beekeeper that it opened beekeeping as a modern agricultural endeavor. First, the removable frame allowed hive inspectors to examine the hive for brood diseases. Next, numerous hive manipulations became possible for the beekeeper: mechanical harvesting of honey, colony strength balancing, feeding frames of honey and pollen, making colony divisions, and rearing queens. Click on today’s photo to see a frame being removed from the brood nest. Capped cells at the edge hold the pupa stage; empty cells in the center reveal where adult bees recently emerged.
--Richard
Posted by Richard Underhill at 8:23 PM