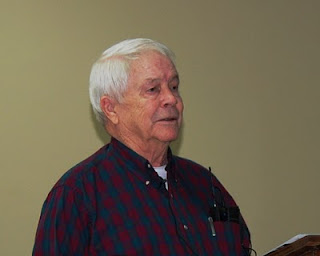 The Memphis Area Beekeepers Association held its Forty-Fifth Annual Short Course in Beekeeping today. One hundred thirty-nine people attended the one-day overview into beekeeping. Such programs are being conducted in local beekeeping associations across the country at this time of the year. New beekeepers are planning their hives in advance of colonies of honey bees becoming available in the spring. Interest in beekeeping is widespread. Paul Mallory is shown here as he began his portion of the program by asking, “Why would you want to keep honey bees?” Paul has been keeping bees for 66 years. He began his career as a queen breeder and producer of packaged bees in 1944. Paul was engaged in one of the early efforts to lessen the effect of the spread of Africanized Honey Bee genes as the aggressive bees moved across South America toward the United States. As part of a team committed to breeding European Honey Bees and exporting them to the affected region of Mexico, Paul bred nice, gentle queens. However, exporting honey bees to Mexico presented a problem. To get the bees through customs at the Mexican border, Paul passed the queens to nuns who carried the queens in their habits.

Paul Mallory served as president of the Memphis Area Beekeepers Association and the Tennessee Beekeepers Association. I am proud to have followed in his footsteps in both organizations, myself. Today, I followed Paul on the program. I gave a brief introduction into Integrated Pest Management strategies for beekeeping. I suggested the new beekeepers consider the trend of moving toward more chemical-free beekeeping. It was a pleasure for me when I made the nomination of Paul which resulted in his receiving an award from the Tennessee Beekeepers Association for a lifetime of service to honey bees and beekeepers. Paul’s charming manner is so disarming. I can’t think of anyone else who could entice nuns to smuggle bees in their habits.
--Richard
Posted by Richard Underhill at 9:44 PM