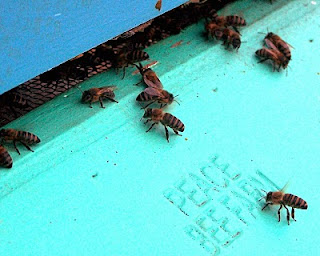 The modern bee hive was designed in 1851 by Philadelphia minister Lorenzo L. Langstroth. He developed the hive after making extensive observations and measurements of natural honey bee nests. Langstroth noticed one detail that had not been described in hundreds of years of man’s handling honey bees. The bees always maintain a space of three eights of an inch between sheets of honeycomb. That’s just enough space for two bees to pass shoulder to shoulder. Langstroth designed a wooden bee hive using the available lumber sizes of the day. The secret to the success of the Langstroth design was a frame to hold the honeycomb which was surrounded on all sides by a space of three eights of an inch. As the frames could be removed from the Langstroth hive, the design became widely accepted. Removable frames enabled hive inspectors to carefully examine hives for brood diseases, especially the highly communicable American foulbrood.

The Langstroth bee hive is actually a working replica of the honey bee’s natural home, a hollow tree. This hive is a series of stacked, hollow wooden boxes arranged vertically like a standing tree. In keeping with the honey bee’s natural design, the bee hive has a small entrance located low on the hive. For protection from the weather, the bee hive has a cover. Bee hives have a bottom board which serves as a floor. There is often a landing board at the entrance, which is similar to a porch on a home. Honey bees select natural cavities in trees which are large enough to have space below the combs of the brood nest. This space serves an important role in protecting the hive from many parasites. Mites which fall from the brood nest are devoured by beneficial ants in this space. The modern screened bottom board, like the one shown in the picture, serves the colony the same way by allowing parasitic mites to fall from the hive to be eaten by ants.
--Richard
Posted by Richard Underhill at 10:07 PM