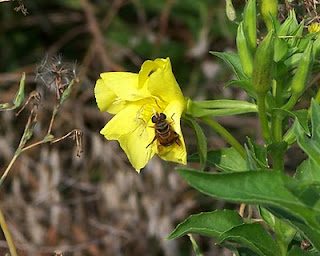 Rita and I met with beekeepers from across the state of Tennessee. Many reported that they experienced heavy over-winter losses of colonies, mainly due to starvation. The honey production from 2009 was also extremely short of expectations, matching annual results for the United States. The year 2009 is being called the worst year ever for beekeepers. In many cases there was just not enough honey in the hives to sustain the bees over the winter. Those with weak colonies should feed their bees to help them through the critical month of March.

Melissa Petersen, the editor of Edible Memphis magazine, sent me a picture and asked me to identify the bee in the picture. It looked a lot like a honey bee, and it looked a lot like a yellow jacket wasp. However, the insect was truly a fly. Honey bees have a hairy, fuzzy body. The fly had a smooth body with brown and yellow stripes that very closely resembled a yellow jacket’s. One of Melissa’s magazine photographers had captured the image of the fly that has evolved a protective disguise to trick potential predators. The fly is actually an insect pollinator as are many moths, butterflies, birds, and bats. Today’s picture of a fly mimicking a honey bee is one of the same species that I picked because it is positioned to clearly show the fly’s eyes. The eyes clearly identify the insect as a fly. This one is pollinating an evening primrose. While the honey bee pollinates about 80 percent of our agricultural crops, the other pollinators serve an important role in filling in when honey bees are either not present or are lured away to more attractive flowering plants. The role of all of the pollinators is attracting increasing interest. One demonstration project for showcasing pollinators is the Melissa Garden in Healdsburg, California in the Russian River Valley. You may view pictures of the pollinator garden at http://www.themelissagarden.com/. “Melissa” is a Greek word for honey bee.
--Richard
Posted by Richard Underhill at 8:42 PM