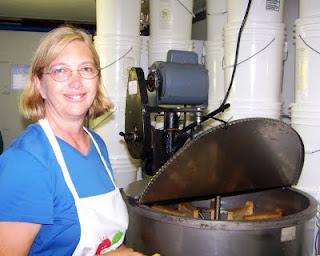 The recorded history of beekeeping tells us that man has managed honey bees for thousands of years. However, most of the advances in modern beekeeping occurred in the mid 1800s. In 1851, L. L. Langstroth developed the modern bee hive with removable frames to hold the honey combs. Shortly afterward, inventors went to work designing equipment to make the beeswax foundation upon which the bees build their honey combs. The foundation was embossed with the six-sided design of the honey bee cells. Other inventors designed the beekeeper’s smoker after the blacksmith’s forge bellows. Seven thousand year old cave paintings show Neanderthal Man calming bees with the smoke from a torch. The beekeeper’s smoker made the use of smoke convenient. With honey comb housed in removable frames, the beekeeper of the mid 1800s had options for handling the hive’s honey. While all previous methods of handling the honey were destructive of the comb, Langstroth’s removable frames of honey comb could be reused. Beeswax comb built by the bees this year can be used by the bees to hold next year’s honey crop.

The fourth major beekeeping invention of the mid 1800s was the extractor, a machine used to spin the honey out of the combs. After the beekeeper removes the beeswax capping over the cells of honey, the frames are placed in the extractor. As the extractor spins, centrifugal force removes the honey. Rita is loading frames of honey into the extractor in the Peace Bee Farm honey house. The output of the extractor is light amber spring wildflower honey.
--Richard
Posted by Richard Underhill at 10:35 PM