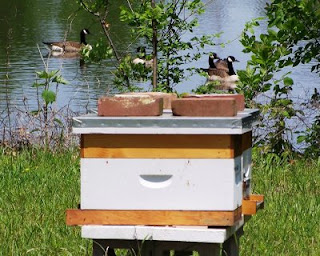 Just as fresh strawberries in the farmers market are a sign that spring has arrived, life abounds on the farm. Today, while I was checking queen mating nucleus hives, located close to one of the Peace Farm lakes, a pair of wild Canada geese swam in close for a look. They were accompanied by their two new offspring. Today was the first day that the birds brought their young out into open water. Geese produce their young in March and April. They seem to ensure their survival by overwhelming the predators by having their offspring at the same time. The springtime births also ensure that there will be strong birds capable of migrating in the fall. We try to accomplish the same tactic in the bee yard that the Canada geese take on naturally. We encourage the bees to increase their numbers in the spring. We raise as many queens as we can in the spring while conditions in the hives are most conducive for the bees to produce queens. Hopefully, we can overcome predators, parasites, pesticides, and other maladies to be able to produce enough healthy bees to make a surplus of honey to feed the bees throughout next winter.

The small hives in the foreground are queen mating nucleus hives. The entrances of each hive face in opposite directions. This orientation helps queen bees returning from mating flights to enter the proper hive. If a returning queen enters the wrong hive, it will be detected as an intruder and killed. The bricks on the tops of the hives hold the covers in place during wind storms and nighttime visits by raccoons. The bricks also provide the beekeeper a hive condition code at a glance. The alignment of these bricks tells me that these hives each hold an egg-laying queen.
--Richard
Posted by Richard Underhill at 9:05 PM