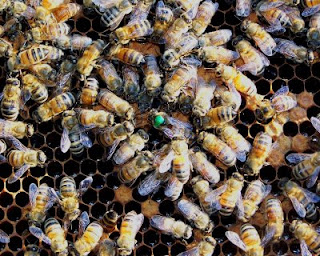 Honey bees, being social insects, require extensive communications to conduct the life of the colony. Most of the communication is accomplished by chemical odors that the bees detect. These chemicals which control the behavior of the bees are known as pheromones. Most of the pheromones are volatile odors which pass through the air and are detected by the bees. At least one of the most important pheromones for controlling the colony is passed among the bees of the hive by touch. This pheromone is called “queen substance.” This pheromone stimulates brood rearing and foraging by the honey bees. It is a sex attractant, and it determines when replacement queens are produced. Queen substance helps stabilize swarms of honey bees, and it affects the behavior of the queen’s attendant bees.

The queen bee’s attendants, known as her retinue, surround her at all times. These worker bees feed her, groom her, and remove her waste. One thing that can readily be observed is that the bees of the retinue regularly stroke the queen’s body, usually along the abdomen, with their legs and antennae. What they are doing is collecting the queen substance pheromone that the queen secretes and passing it along to the other bees in the hive. If the queen is dies or is removed from the hive, the colony will know of her loss within an hour by the lack of queen substance. They will begin queen replacement within four hours. If you click on the photo you can see a young queen, marked with green, being surrounded by a retinue of at least 22 worker bees. The retinue can be identified because the attendant bees usually face the queen in a circle. They pose like football players in a huddle.
--Richard
Posted by Richard Underhill at 12:05 AM