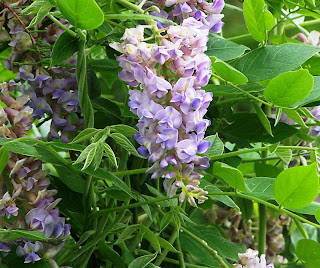 The image of wisteria blooming with its fragrant blossoms takes our memory back to earlier times. Actually, finding wisteria vines entwined with the trees along the margin of woods is good evidence that this location was a home site in the past. Wisteria, daffodils, and yucca remain long after a site has been abandoned and all wooden structures have rotted away. This wisteria as well as shards of broken glass tell of past usage of what is now woods. Wisteria is a vine in the important bee plant family of legumes, the pea family. This is the same family that includes soybeans, peanuts, clover, and vetch. The legume family is important to the bees in that many of the family’s plants provide large quantities of nectar and pollen. Many of the legumes also enrich the soil be capturing nitrogen in the air and putting it into the soil in a useful form for plant growth.

Wisteria is most fragrant. At times the blossoms abound with honey bees. However, in this rainy period I didn’t find bees working the wisteria during its relatively short blooming period. With daily rains, the bees were unable to fly while the plant was in bloom. This year’s rainy conditions in the Arkansas delta seem to have contributed to an increase in the number of queens that didn’t get properly mated. It also seems that confinement in the hives during stretches of rainy days has also increased the amount of swarming as well.
--Richard
Posted by Richard Underhill at 10:51 PM