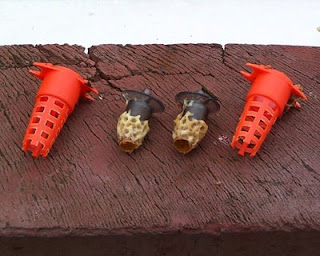 We raise new queen bees in small hives called queen mating nucleus hives. These hives house the bees necessary to care for a new queen bee until she is able to lay enough eggs to sustain an entire colony. The bees in this hive maintain a temperature in the brood area where the queen cell is located at about 95 degrees. Once the queen has emerged from her queen cell, the nurse bees and attendant bees will continuously feed and tend to her. After a few days the new queen will make her mating flights from this hive. A significant step in the raising of new queen bees is checking to see if the queen successfully emerged from her queen cell. In the photo we can see two queen cells in which the queen successfully chewed her way out of the end of the cells. The cells were started with a larva grafted into the plastic queen cell cups. The bees in a starter colony drew out the beeswax cells in the shape of peanuts. The peanut-shaped cells were held in the queen mating nucleus hive in the orange-colored protectors.

The generally shy and reclusive queen will remain in the hive for about five days after emerging as an adult bee from the queen cell. During this time she will seek out any other queens or queen cells and kill them. Next, she will make one or more mating flights in which she breeds with a number of drone bees. The queen must then find her way back to the correct hive. She should be ready to start laying eggs after a few days. Once the queen is laying eggs, this nucleus hive will become the start of a new colony of honey bees.
--Richard
Posted by Richard Underhill at 10:04 PM