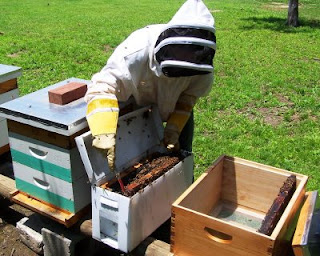 There are several ways for a person to start a hive of honey bees. The simplest way is for one person to purchase an established colony from another beekeeper. Another method of starting a colony is to capture a swarm of bees. This can be done when the bees naturally swarm to propagate on a colony-wide basis. These bees can be removed from a tree limb or a structure, such as a mail box. A feral colony of bees can be removed, usually with great effort, from a hollow tree or from within the walls of a house or building. Beekeepers can divide a colony and add a second queen in a method that is similar to swarming. Honey bees are often purchased from a bee breeder in a packaged form. With a package, a caged queen bee is delivered in a ventilated box along with about three pounds of bees, roughly 12,000 bees. Another method of establishing a bee hive is for one to purchase a nucleus colony. A nucleus colony consists of several frames of bees taken from the brood area of an established honey bee nest. The frames will contain brood and an egg-laying queen bee. A nucleus colony is already established as a colony organized around the queen bee’s pheromones. It is ready to rapidly expand the colony size for honey production or pollination service.

Here we see beekeeper Dallas Holland setting up a new hive with frames of brood and bees from a nucleus colony. The five-frame nucleus colony that she purchased was delivered in the white box. She is placing the frames into a ten-frame hive body along with five empty frames. The bees will rapidly expand to fill each of the ten frames with brood and bees. You can see in the bottom of Dallas’ hive the screened bottom board that is used as part of an Integrated Pest Management program. Dallas has chosen bees bred for resistance to several known pests. Her efforts are in keeping with a growing trend toward returning to more natural, largely chemical-free beekeeping techniques.
--Richard
Posted by Richard Underhill at 9:58 PM