Nectar Flows in the Garden 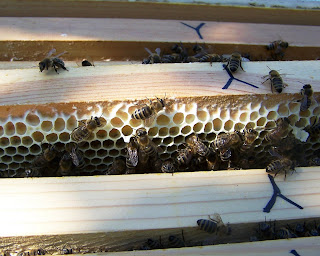 In the honey bee’s natural hive, pollen and honey are stored in close proximity to the brood nest. This allows the bees to feed the larvae the large amounts of food that the developing bees require. The bees store surplus honey above the brood nest. The modern bee hive, developed by Philadelphia pastor L. L. Langstroth in 1851, is designed to match the honey bee’s natural tendencies in nest building. The Langstroth hive has a brood nest at the bottom and storage space above for the bees to store surplus amounts of honey. The honey storage boxes are called “supers,” because they are superimposed one on top of another. Inside the supers are frames which hold the beeswax combs that the honey bees make. Langstroth’s design, which he copied from natural honey bee nests, has removable frames. These removable frames can be examined to check for bee health. They also allow for the beekeeper to remove frames of honey

The bees take in as much nectar as the colony can collect whenever plants are in bloom. The one thing that honey bees don’t do is stop foraging just because they have stored enough honey to carry the colony through the next winter. The bees’ eagerness and ability to produce a surplus of honey makes beekeeping for honey production possible. One of the ways that the beekeeper can tell how much nectar is being brought into the hive and how much storage space is needed is to look in the honey supers. When there is a considerable amount of nectar coming in, the bees are building large amounts of beeswax comb to store the honey. The bees produce the beeswax in glands on the underside of their abdomen. To produce beeswax, the bees must eat honey. White beeswax being added to the sides of the top bars of the frames tells the beekeeper to add another super. That is the case with this colony of Peace Bee Farm bees in the Memphis Botanic Garden's urban orchard.
--Richard

Posted by Richard Underhill at 5:12 AM