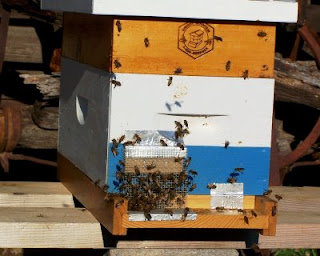 Every honey bee colony has a queen bee. For the beekeeper to expand the bee yard or to have extra queens for requeening colonies, new queens must be raised. We can assist the bees in the production of queens, but only the bees can produce a queen. They do it by feeding a special food, called royal jelly, to the developing brood on the fourth day of development. This is the day that the egg becomes a larva. Fertile eggs will develop into worker bees if fed a normal diet, but they will develop into queens if continually fed royal jelly. Beekeepers start this process of queen development into motion by moving these young larvae into hives of bees set-up to feed and care for the larvae. The method of moving the larvae is called grafting. The bees build queen cells around the developing queen larvae.

The queen cells are next moved to queen mating nucleus hives like the one in the picture. Here, the queen cell is cared for by the bees. They will also feed and tend to the new queen once she emerges as an adult. She will make her mating flight from this hive. To help her find her own hive, we paint each mating nucleus hive a different color. A screen barrier outside the hive’s entrance helps prevent robber bees from entering. This process of setting up queen cells in mating nucleus hives mimics the procedures that bees regularly perform in nature.
--Richard
Posted by Richard Underhill at 7:02 AM