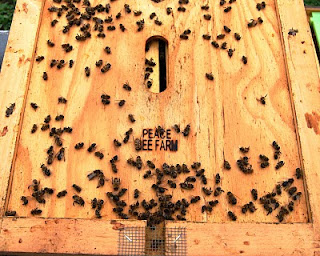 Honey bee colony losses have numbered close to one third of the managed hives for each of the past three years. Still, beekeepers are replacing their lost colonies. The months of February and March are often the harshest for the honey bees. After a long winter’s confinement in the hive, the bees’ stores of food are dwindling. The start-up of the colony’s population puts demand on food supplies in several ways. Brood nests must be warmed to greater temperatures than clusters of bees without brood. The larvae of the increasing population consume large amounts of both honey and pollen. As supplies of food are being depleted, the demand for the food is increasing. This is happening before the great blooms of spring flowers. The earliest sources of nectar and pollen, dandelion, skunk cabbage, and red maple may bloom while the bees are confined to the hive due to cold weather.

Beekeepers will find a number of their colonies have not survived the winter. The cause of the death of the bees is not always apparent. Starvation is probably the most common cause, and it is readily identified. Since the bees share food throughout the colony, the workers can be found with their heads in the cells where they died looking for the last of the food to pass around. If you click on the photo, you can see dead bees on the inner cover of the hive. The presence of drones indicates that this colony probably lost its queen in the fall. Colonies without a queen often retain their drones through the winter. The queen-less colony’s population dwindled till it could no longer warm itself. Other winter losses may occur as the result of infestations of mites or honey bee diseases, like Nosema. Early detection of the loss of the colony allows the beekeeper to protect hive equipment from scavengers, like the wax moths and small hive beetles, and prepare to start a new colony in the spring.
--Richard
Posted by Richard Underhill at 9:42 PM