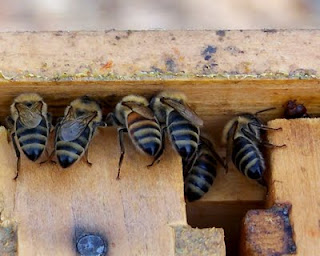 Honey bees are resilient creatures. In the short time that the small hive beetle has been in the United States, the adaptable honey bee has learned to live with this invasive species. The small hive beetle entered this country in about 1999, probably as a stow-away in a shipment of cargo from Africa. Many invasive plants and animals are inadvertently carried around the world through trade. We first detected the small hive beetle in the Arkansas Delta around 2004. At first, the hard-shelled beetles seemed to have free roam of the bee hives. However, within a few months, I noticed that the honey bees’ behavior was changing toward the small hive beetle. The bees aggressively sought out the beetles, chasing them into distant corners of the hive. Whenever a honey bee could catch a beetle, she would hold it and fly out of the hive with it.

The honey bees quickly learned how to help control these insects that are protected by a shell tough enough to resist the bees’ bites and stings. They began to build jails in corners of the bee hive to house the beetles. These jails were actually small compartments constructed of bee glue, called propolis. A common location for a jail is the space between the end of each hive frame and the edge of the hive body. Click on the picture to see guard bees tending to their captured small hive beetles trapped in one of these spaces. On the right side of the photo, a small hive beetle tries to escape. You can see the head and thorax of the dark brown colored beetle. Its antennae look like they have balls at the ends. These balls are actually sensitive feather-like structures. Since the bees cannot kill the invading small hive beetles, they resort to containing them in the hive, preventing their reproduction in the cells of stored pollen. The honey bees will even feed their captive small hive beetles.
--Richard
Posted by Richard Underhill at 9:14 AM