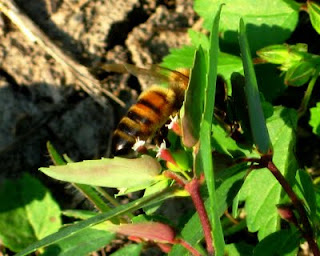 The importance of honey bees and insect pollinators for the production of our fruit and vegetable foods is readily seen. At least one third of our diet is dependent upon insect pollinators to complete pollination of the flowering plants as they visit the flowers seeking nectar and pollen. However, the role of the bees in the production of our meats and dairy foods is not quite as obvious. Many of the high-protein food sources for cattle are flowering plants that require bee pollination for seed production. One of the major forage crops for cattle is lespedeza, as shown in today’s photo. A honey bee is collecting nectar from the tiny flowers of trailing lespedeza. I find at least three common species of lespedeza here at Peace Bee Farm. Other cattle feeds that require bee pollination to produce seeds are clover and alfalfa. Each of these forage plants are members of the important bee plant family of legumes. The legumes are important to the bees, because they provide large amounts of nectar and pollen. The bees are important to the legumes, because they need the bees for reproduction.

The legumes provide a sizable amount of the feed required to support the production of meat, milk, and cheese. Not only do the legumes provide food for cattle, they also support considerable wildlife, including animals from rabbits to deer. One of the most important effects of having healthy legumes is that they enrich the soil, because many have nitrogen-fixing bacteria in nodules on the roots. These bacteria take nitrogen from the atmosphere and convert it to a usable state in the soil. As the principal pollinator, the honey bee plays a critical role in our food production and the health of the environment.
--Richard
Posted by Richard Underhill at 10:15 PM