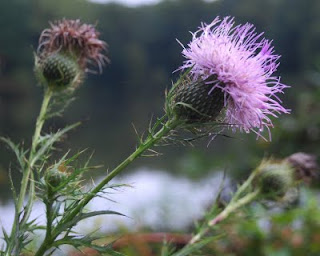 When beekeepers meet those who don’t handle honey bees, the first question asked is usually, “How often do you get stung?” Many in the public feel that honey bees are to be left alone because they sting. True, honey bees are stinging insects. They belong to the same order as wasps, hornets, yellow jackets, bumblebees, and numerous solitary bees. Generally, honey bees only sting when mashed or while defending their hive. Children learn at an early age that stepping barefooted on bees foraging in clover will guarantee a sting. Also, honey bees will sting any time that we carelessly mash a bee with our hands. Honey bees do vigorously defend their hive from attack from other insects, mammals, and even beekeepers. Carnivorous wasps, hornets, and yellow jackets regularly attempt to enter bee hives. Robber honey bees from other colonies may be the greatest threat to the hive. Hives are also attacked by skunks, raccoons, and, in some areas, bears. Beekeepers are considered an intruder by the bees unless the beekeeper moves gently while manipulating the hive. Beekeepers regularly use smoke to interrupt the pheromone communications of the guard bees. In defense of their hive, the guard bees use their barbed sting, planting it firmly in the skin. Attached to the intruder’s skin, the sting contains a venom sac, muscles to continue to pump the venom, and alarm pheromone glands. The pheromones alert other guard bees and mark the intruder’s location. Stinging an intruder is fatal to the guard bee, but she helps defend the colony by summoning other guard bees to multiply the number of available stings.

When I came across field thistle in bloom, it was during a brief intermission in periods of rain. When the sun broke out, butterflies dropped in to collect thistle nectar. It’s been a rainy summer. Harvesting honey during weather conditions not suited for opening the hives, I found myself the target of guard bees defending their nest. They performed well.
--Richard
Posted by Richard Underhill at 9:07 AM