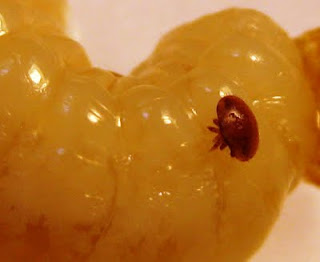 The Varroa mite is probably the greatest killer of honey bees. This parasite entered the United States in 1987, just three years after the tracheal mite was detected. Since then, the population of honey bees has declined steadily. The Varroa mite is a small creature, about the size of the head of a common sewing pin. It has eight legs and is related to other mites and ticks. Varroa are parasites of pupae and adult honey bees. The female Varroa mite enters the brood cell of a larva just before it is capped. It feeds on the larval food and then attaches to the pupa and sucks its bee blood for nutrition. The mites reproduce inside the cell, and then leave the cell attached to the adult honey bee when it emerges. The Varroa mite weakens its honey bee host and shortens its life by sucking its blood. However, it causes many more problems for the entire colony. The Varroa is thought to be responsible for vectoring at least 15 viruses affecting the honey bee. Colonies weakened by Varroa are subject to dying due to bacterial, fungal, or viral diseases.

The survival of colonies of honey bees is often the result of the beekeeper’s strategy to control Varroa mites. When parasitic mites first entered the United States, they decimated the honey bee populations. Chemical miticides were widely used, but the mites soon developed resistance to these agents. Now more natural methods of controlling the mites are being explored. All methods fit into carefully designed integrated pest management plans. At Peace Bee Farm, we start with genetically resistant honey bee stock, and then breed from the strongest survivor stock. Click on the picture to see a Varroa mite that Shirley Murphy located attached to a honey bee pupa.
--Richard
Posted by Richard Underhill at 11:10 PM